Dan Kemp: Short-term volatility is not the real enemy of investors

Instead of fearing short-term movements, investors should look to the long term and worry about under-performance and capital loss

During his first inauguration address, President Franklin Roosevelt famously said: “The only thing we have to fear is...fear itself.” More than 80 years later, that sentiment is embedded in the professional investment industry, which has become obsessed with volatility as a measure of risk and therefore the enemy of investors.

While this obsession is most obvious in the attention given to the VIX index (also known as the “fear index”), it is equally evident in the way investors use volatility as a pejorative term when discussing market movements or forecasting the impact of market events. This language has been in use a lot by UK equity fund managers in 2016 as the stockmarket contends with sharp swings in sentiment and the external shock of Brexit.

UK equities and funds that invest in them therefore provide a useful case study to examine the rationality of investors’ fear of volatility and the impact of volatility on the behaviour of investors. To answer the first question, let’s consider the regular saver. An investor who contributed £1,000 a month into a widely used UK index tracker over the first seven months of the year would have experienced a total return of 8.52 per cent by the end of July, more than the 8.02 per cent return for an investor who made a lump sum commitment of £7,000 at the start of the year. This gain is due to the pound-cost-averaging effect and reflects the widely appreciated positive impact of making regular investments into highly volatile assets.

However, volatility is less kind on investors who are regularly withdrawing capital or are fully invested. Those who invested £7,000 at the start of the year would have experienced a peak-to-trough loss of -11.52 per cent over the period. While this loss was fully recovered after only 36 days, a nervous investor may have decided to cut their losses and sell their investments, an action that would have crystallised short-term volatility as a permanent capital loss. The danger of volatility is that it can lead to poor investing behaviour resulting in long-term financial harm. Consequently, it is the fear of volatility rather than volatility itself that can be most harmful to investors.

“There is an obsession with volatility as a measure of risk”

Periods of volatility can also be harmful to active managers as many professional investors make the same behavioural errors as amateur investors. In addition, the benefits of stockpicking are undermined during volatile periods as correlations tend to increase and the individual characteristics of each company are overshadowed by broader macro concerns. 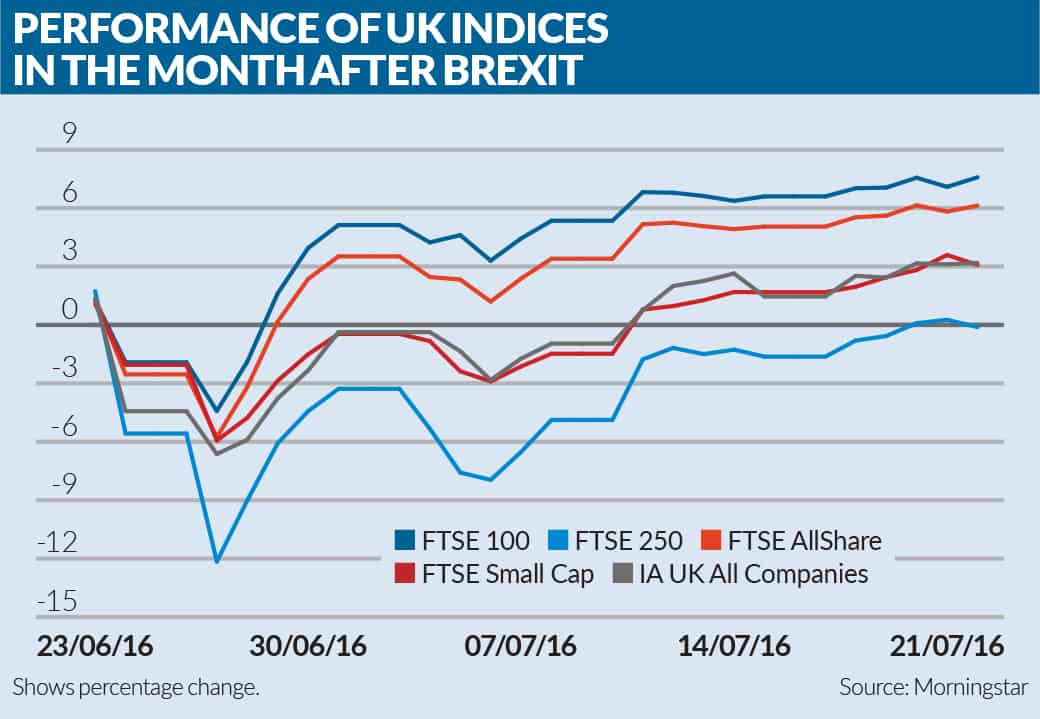 This latter problem was demonstrated clearly during the period that followed Brexit when active managers in the IA UK All Companies sector underperformed the benchmark FTSE All Share index over the following 30 days by the largest monthly amount, at -2.96 per cent, since November 2011. A key source of this underperformance was an overweight exposure to mid and small cap companies at a time when these latter groups underperformed the FTSE 100 index by -7.70 per cent and -4.50 per cent respectively.

Instead of using this most recent period of market volatility to increase exposure to undervalued, economically sensitive stocks, managers have tended to prefer “expensive defensive” companies, as evidenced by the average increase in the defensive exposure of UK equity funds from 23.99 per cent to 25.50 per cent over June. As valuation, rather than volatility, is one of the best indicators of future returns over the medium term, this move towards defensive stocks suggests investors may be harming the long-term prospects of their clients in an attempt to obtain short-term respite from volatility.

This should have an influence on the way we select managers for clients. Those funds that have performed best for clients over the recent past by holding expensive defensives may not be the same funds that generate the best returns in the future, despite the fact that the short-term historic return differential flatters the skill of the defensively positioned manager and under-appreciates the skill of the manager who had already moved into attractive, but volatile, economically sensitive stocks.

While fear plays an important role in investment, it seems investors may be fearing the wrong thing. Instead of fearing short-term price movements, we should be afraid of long-term under-performance and permanent loss of capital. It is the former fear that Roosevelt warned us about and that warning is as true now as it was in 1933.

The Long and Short of it: Review of markets December 2019

Election result: What does it mean for UK equities?

Andrew Robbens
The UK Edge
We use cookies to help improve your experience. By continuing to browse our website you are consenting to our use of cookies.
Learn more